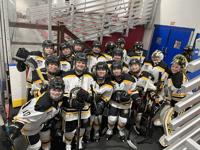 Long time Steel City Selects head coach, Jim Black, gets ready for a fresh season.  He has put together a well qualified group of coaches to lead the 19U Selects.  Staff includes Bill Allsopp, Jon Jackmack, David Hurd, John Mudrany, and Bernie Marrese.  These gentlemen bring a wealth of knowledge and experience.

As for the team, the roster of 18 girls includes birth years from 2004 to 2007. With only five returning players from the 2022 USA Hockey Nationals gold medal team, the 19U team looks very different.  There are six seniors on this team.

Their opening weekend was September 10-11, 2022.  They hosted the Philadelphia Jr Flyers for three games.  The weekend ended up with two wins and a tie.

The 19U team will host the Carolina Jr Hurricanes the weekend of September 17-18.