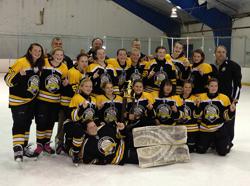 The U14s next games will be September 12/13 at home against the Erie Lions and Amherst.