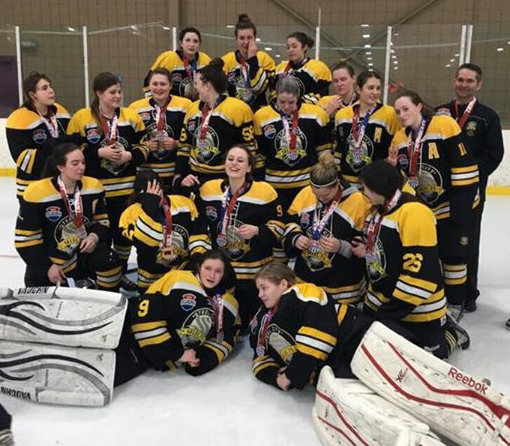 The 19U Selects headed into Nationals with an opportunity to prove that they belong in the conversation of the top teams in the country. They started off Pool Play with a matchup against the Reston Raiders. The 19's came out flying against the 34th ranked (by MyHockey.com) Raiders and ended up with a 7-1 win. Jayda Mears led the team with a hat trick and Mira Rolin ended up with 4 points. The team celebrated by heading to USA Hockey Arena to watch Team USA beat Team Germany 11-0 in the IIHF Women’s World Championships.

The game-two matchup for the Selects was against the highly-ranked (5th) Team South Dakota. That didn't intimidate the 9th ranked Selects as they prevailed with a 2-1 victory.  During the game the team stuck to the game plan and grinded out a hard fought victory. The Selects next faced 29th ranked West Chester. West Chester has some players that the Selects had seen before on the Exton Elite team during the Steel City Girls Invitational in February.  At that time, SCS beat Exton 2-1 to move on in the tournament. There was a different outcome this time as the Selects fell to the Quakers w 3-2 in overtime.

That finished up Pool Play and the Selects moved on to the Quarterfinals as the second seed in their conference and faced the Connecticut Northern Lights who was ranked in the top-two teams in the nation most of the season. The Selects came-out ready to battle, working hard and executing the game plan perfectly.  They beat the Northern Lights 3-2 in overtime on a goal by leading scorer Sara Gargasz.  The Selects used a trio of players -- Bailey Loehrke, Charleigh Wagner, and Morgan Gloeckl, to kill off a late 2:00 five-on-three that will stay in the minds of everyone! Not to mention the team received a few great saves by the "Best Goalie in the Country" Katie Hill.

On to the Semi-Finals against the #3 ranked San Jose Sharks. Unfortunately the Selects fell to the Sharks, the eventual National Champion, by a score of 3-0. But in the end, the Selects were able to leave the ice with their heads held high and their necks holding a bronze medal.

The 2017 U19 Selects finish as #3 in the country...and walk out with even more motivation for next year, or as goalie Katie Hill puts it...UNFINISHED BUSINESS......sounds like a good team slogan for 2018!